Let’s talk about social media. But first ponder, in context, this 141-character tweet from Jesus:

“…When so many thousands of the people had gathered together that they were trampling one another, he began to say to his disciples first, ‘Beware of the leaven of the Pharisees, which is hypocrisy. Nothing is covered up that will not be revealed, or hidden that will not be known.’” (Luke 12:1-2 ESV)

This is a warning against hypocrisy. But notice the context: “When so many thousands of the people had gathered together that they were trampling one another.” Isn’t this when hypocrisy is most likely? And isn’t social media the perfect modern equivalent—many thousands of people trampling one another online? Aren’t we tempted to craft a perfect public persona before the crowds that we hope (or fear) are watching? And aren’t we tempted to believe that we actually are the person whom we project ourselves to be?

What is the solution? Not spilling your “ugly guts” on Facebook, surely—although public confession from time to time is indeed healthy. And not becoming a hermit—although many of us do spend too much time seeking crowds, and regular prayerful solitude does help purify our souls. Rather, the solution is to live in line with the gospel—to live so that we will be unashamed when the things that are “hidden” will “be made known.” This means living with integrity, so that our private lives are as beautiful as we wish to look on Pinterest. It means we will not protect private sin behind Twitter testimonies. The gospel says that Jesus is returning to reward the righteous and judge the wicked. In that day, our private lives will become more public than if they had been streamed live online! 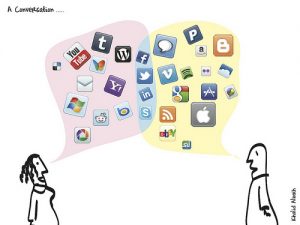