There is a strong tendency in current scholarship on Paul to resist seeing Christ’s death as in our place, instead of us. Rather, scholars prefer a view of Christ’s death with us—where he identifies with us rather than dying a unique death alone for us. Indeed, the point that Christ’s death is representative and therefore not substitutionary can often be made briefly in passing, as if it were understood to be an uncontroversial thought. (Gathercole, 29. Emphasis added.)

It is this “uncontroversial thought” that Gathercole aims to challenge in this brief (128 pp.) book. I think he does so well.

What Gathercole does aim to do is to provide evidence, based primarily on two Pauline passages, that substitution is one biblical and valid way of understanding Christ’s cross-work. 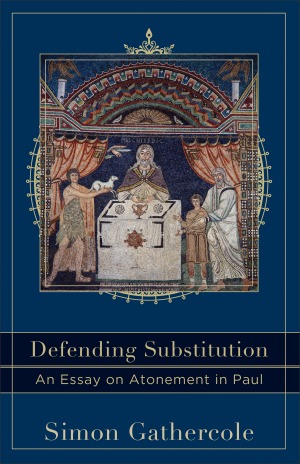 Defending Substitution is based on several lectures given by Gathercole, but it reads very well as a book. Here is the table of contents:

Excursus: An Objection—Why, Then, Do Christians Still Die?

3. The Vicarious Death of Christ and Classical Parallels (Rom. 5:6-8)

In the Introduction, Gathercole defines substitution as “Christ’s death in our place, instead of us… He did something, underwent something, so we did not—and never will—have to” (pp. 15-16). He carefully emphasizes scope and aims of his study:

The matter of what precisely it was that Christ bore in our stead will not be treated here… Substitution is logically distinguishable from related concepts such as penalty, representation, expiation, and propitiation… The investigation here is to be focused not on these other themes but quite narrowly and specifically on substitution… To repeat…, the aim here is not to say that Scripture teaches substitution rather than representation but to say that both are important parts of biblical teaching. (pp. 18-23)

Despite not focusing on penal substitution, Gathercole does provide three helpful responses to those who say that this doctrine makes Jesus the victim of “cosmic child abuse”: “First, such theological criticisms neglect the obvious fact that the death of Christ is not that of a third party but is the ‘self-substitution of God’… Second, …Jesus offers himself as a sacrifice in line with his own will… Third, …a response can also be offered that is more subjective but… certainly no more subjective” than the caricatures of “certain atonement theories as cruel, violent, unjust, and the like”: “this is not how millions of Christians over the centuries have experienced such teaching.” Indeed, criticism of penal substitution seem to come more from academia than from “the world’s lay Christians” (pp. 24-25).

In Chapter One, Gathercole responds to three atonement theories which aim to leave no room for substitution. The “Tübingen understanding of representative ‘place-taking’” (popular in parts of Germany) draws on a particular interpretation of Levitical sacrifices to assert that “when Christ dies, all die with him” (p. 36). A second theory, promoted by Morna Hooker, “considers substitution to be not only un-Pauline but actually something criticized by Paul” (p. 38). “Paul’s understanding of the process is therefore one of participation, not substitution; it is a sharing of experience, not an exchange. Christ is identified with us in order that—in him—we might share in what he is” (Hooker as quoted by Gathercole, pp. 40-41). A third theory, popular particularly in North America, is “apocalyptic deliverance.” This view, associated with scholars such as J. Louis Martyn, asserts that it was Paul’s opponents who emphasized that Christ died to provide forgiveness. For Paul, in contrast, “the human plight consists fundamentally of enslavement to supra-human powers; and God’s redemptive act is his deed of liberation” (Martyn as quoted by Gathercole, p. 44).

Graciously, Gathercole finds much of value in all three theories. (So did I.) But he faults each on several points, and all for downplaying the problem of sins (individual acts of evil), as opposed to Sin (singular, evil personified). He presents abundant evidence to show that sins were a frequent and important focus of Paul’s writings.

Chapter Two takes a refreshingly positive turn, with its constructive exegesis of 1 Corinthians 15:3. “Dying for sins,” Gathercole notes, is not the same thing as “dying for us” (p. 55). “The aim of this chapter, then, is to examine Paul’s theology of the atonement through the lens of the words ‘Christ died for our sins according to the Scriptures’” (pp. 56-57). After demonstrating the importance of his chosen text, Gathercole assembles impressive linguistic evidence that Paul is alluding to Isaiah 53 in 1 Corinthians 15:3. This is important because “vicariousness—in the sense of exclusive substitution—is clearly present in the Hebrew text” and Greek versions of Isaiah 53 (p. 68). Multiple OT texts present a norm that forbids substitution (Num. 27:3; Deut. 24:16; Josh. 22:20; 1Kings 16:18-19; Jer. 31:30). “In this sense,” Gathercole observes, “Christ’s death is not according to the Scriptures” (p. 71). But Isaiah 53 turns the OT norm on its head, describing salvation being achieved through an innocent individual bearing the sins of others. “The default Old Testament position would be ‘he died for his sins’ or ‘we died for our sins.’ The miracle of the gospel, however, is that he died for our sins” (p. 73). Paul’s allusion to Isaiah 53 suggests that he understands Christ’s work as being, like the Servant’s, substitutionary.

In a brief excursus Gathercole explains why, if Christ died for us, believers still die. He suggests that Paul writes about death in four ways: (1) the physical death of believers, which he often “undermines” by language like “falling asleep”; (2) “the death to sin and burial in baptism that occurs in Christian initiation”; (3) the death of unbelievers, the penalty for sin and living according to the flesh, which Paul describes without softening, using language like “perish”; (4) the death of Jesus, which Paul never softens with terms like “falling asleep,” nor finalizes with terms like “perishing.” “The main point to conclude is that believers do still go on to die death #1 above but will not ‘perish’ (#3 above)… Christ has undergone a death like death #3 above to save us from death #3; therefore death #1 is not nearly so serious—it is a mere falling asleep” (pp. 80-83).

In Chapter Three, Gathercole asks what examples Paul might have had in mind when he writes that “for a good person someone might perhaps even dare to die” (Rom. 5:6-8). He concludes that “the most natural link in Romans 5 is with examples of vicarious death in classical texts (broadly understood). There are a number of such classical works… where this same substitutionary language is used” (p. 90). The most prominent of such classical examples is Alcestis, who was referenced by writers spanning a time from Euripides (c. 438 B.C.) to the second century A.D. and beyond. The story of Alcestis was part of common culture in Paul’s day: “An exact contemporary of Paul, the philosopher Musonius Rufus, uses Alcestis” as a positive example (p. 96). There are interesting parallels between accounts of Alcestis and Paul’s language in Romans 5 and elsewhere: classical writers said that Alcestis “dared” to die “on behalf of,” “in place of,” or “instead of” her husband, who is described as a “good” man. Other substitutionary deaths are described by classical philosopher and writers, but they are understood to be rare (cf. Paul’s “one will scarcely die… perhaps… one would even dare to die”), occurring only in the contexts of conjugal love, the institution of friendship, and family ties. “Paul sees that there is common ground between these pagan instances and the death of Christ”but “for Paul the differences are more striking than the similarities,” for Jesus dies for “the ungodly… sinners… enemies” (p. 104). Yet the core similarity remains: in these classical examples, “the death ‘for’ another is not merely a death ‘for the benefit of’ another—‘for their sake’ in a general sense. Nor is it death with them. Rather, it is… a death that averts death” (pp. 106-107). Thus Paul’s apparent allusion to these classical examples supports the conclusion that he sees Christ’s death as being substitutionary.

I find little to fault in Gathercole’s book. A few times I wondered if there was a bit of slippage in his logic, with him (a) proving that Paul was interested in our need for forgiveness for individual sins and then (b) using that evidence as proof that Paul believed in a specifically substitutionary atonement. But might not representation also be—at least theoretically—a solution for the problem of sins, with us dying with Christ for our sins (rather than he dying for our sins)? But this tentative critique is peripheral to Gathercole’s main arguments.

This book left me hungry for more. Other texts should be tested for substitutionary theology (Rom. 4:25; Gal. 1:4; 2:20; Heb. 2:9; etc.), and I would like to read an equally careful defense of a specifically penal substitutionary atonement. But what I liked best about this book—besides the excellent exegesis of its two main texts—was Gathercole’s repeated insistence that we allow for the NT’s multiple images of the atonement.

Let me end as Gathercole himself ends:

The choice between salvation as dealing with both ‘trespasses’ or ‘debts’ (plural) and with liberation from the power of (the) evil (one) was a choice apparently not faced by Jesus in his formulations of the Lord’s Prayer. Similarly, we need not be forced to opt either for Jesus’s substitutionary death, in which he deals with sins, or for a representative or liberative death, in which he deals with the power of evil. What therefore God hath joined together, let not man put asunder! (pp. 112-13)

Gathercole achieves his goals well in this book.
I give it 4.5 out of 5 stars.

What did you learn from this review? Do you have other favorite resources for understanding Christ’s work of atonement? Share your questions and insights below!

Disclosures: I received this book free from Baker Academic through the Baker Academic Bloggers program. The opinions I have expressed are my own, and I was not required to write a positive review. I am disclosing this in accordance with the Federal Trade Commission’s 16 CFR, Part 255 http://www.access.gpo.gov/nara/cfr/waisidx_03/16cfr255_03.html.