In this post I’m doing a dangerous thing—questioning grammatical details in English Bible translations when I am only a second-year Greek student. So please take this post with a grain of salt. If you are a Greek scholar and you see I am missing something, please let me know and I’ll happily correct this post. Meanwhile, since blogs are good for thinking out loud, here goes!

[Edit: I’ve received responses from a couple people who know Greek better than I do, including my Greek teacher, Joseph Neill. Here is part of what he wrote:

Could it be translated as “God is able”? Yes, but the grammar does not require it; in fact, it leans the other way I think. But based on God’s nature and the greater context (4:23 especially), it is right for us to understand from this passage that not only was God able, but God is able. (Context might lean this way.) So, if this is what Paul had in mind (God is able), I think he would have said exactly what he did say. But then again, if he did not have all this in mind (but rather God was able) he would have still said it exactly how he did say it. =)

Later: I would need to study and think more about it to be sure I got it right, especially the part that suggested Paul  could mean either was or is (in English thought) and he would have worded it the same either way. I would like to find examples that conclusively prove this hunch of mine.

See this comment below for his full response, as well as similar thoughts in comments from Marlin Sommers.]

Today I continued reading through Romans in Greek for the first time. Near the end of chapter four, I noticed something interesting:

Here is the same clause in some popular English translations:

What he had promised, he was able also to perform. (KJV)

What He had promised He was also able to perform. (NKJV)

What God had promised, He was able also to perform. (NASB)

What God had promised, he was also able to do. (CSB)

What God promised he was also able to do. (NET)

God was able to do what he had promised. (ESV)

God had power to do what he had promised. (NIV)

Here’s one possible explanation: Some Greek writers frequently insert “present tense” verbs into narratives of past events. But they do this without intending to imply that the action is happening presently. This is sometimes called the “historical present.” In other words, the Greek “present tense” does not neatly match English present tense verb usage, sometimes being used instead for other rhetorical purposes. (Hence my scare quotes around “present tense” above.)

You can see this in a translation such as the NASB, which marks these verbs with an asterisk. Here’s a random example from Mark:

Is the same thing happening here in Romans 4:21? I doubt it. This use of the Greek “present tense” is usually found in narratives—in stories. This passage is not a story but rather a discussion about a story. Steven Runge, who discusses the “historical present” in depth in his recent book Discourse Grammar of the Greek New Testament, does not appear to include even one example of the “historical present” from any of Paul’s letters. Almost all of his examples come from the Gospel narratives.

Another possible explanation for the English translations here is that they switch from present to past in order to match the other half of the clause: “what he had promised.” But there, too, the Greek seems to carry more of a present tense: “what he has promised.”

In summary, it seems to this second-year Greek student that neither half of the clause clearly carries a past tense sense. The first half (probably) depicts a present state (“what he has promised”) and the second half (more clearly) asserts a present reality (“he is able also to do”).

Whatever things God hath promised, he is mighty also to do. (Wycliffe)

What he has promised he is able also to do. (Darby)

What God has promised, He also is able to do. (TLV “Tree of Life Version”)

God is able to do whatever he promises. (NLT)

Similarly, though I haven’t found any commentaries that directly address this translation question, several appear to indirectly affirm my conclusions. First, a comment from Moo:

It is Abraham’s conviction that God is fully able to do whatever he promised that enabled his faith to overcome the obstacle of the tangible and visible “facts.”1

And, better, a direct translation by Schreiner, followed by commentary:

Abraham grew strong in faith “by being fully assured that God is able to do what he had promised” (πληροφορηθεὶς ὅτι ὃ ἐπήγγελται δυνατός ἐστιν καὶ ποιῆσαι…)… He surely has the power to accomplish what he has promised.2

[Edit: In his 2018 revision of this commentary, Schreiner interprets Romans 4:21 as even more clearly expressing the timeless nature of God’s ability. His translation now reads: “by being fully assured that God is able to do what he promised” (instead of “had promised”).  And his comment now reads: “He surely has the power to accomplish what he promises” (instead of “has promised”). See page 246.]

In sum, I give Darby top marks for following the Greek most closely: “What he has promised he is able also to do.” And I give the NLT top marks for best expressing the timeless truth that Abraham grasped: “God is able to do whatever he promises.”

Whether or not I am right in the above, this I do know is true: My own faith, like Abraham’s, will be strengthened only if I am confident that God is able—past, present, future, always able—to do everything he has promised.

This timeless nature of God’s power is expressed clearly even in English translations several verses earlier in Romans 4: “The God who gives life to the dead and calls things into existence that do not exist” (Rom. 4:17 CSB).

John Toews puts it this way:

What a mighty God we serve!

Greek scholar or not, share your insights in the comments below. And thanks for reading.

“I and my wife are thankful God answered our prayers and gave us children.” 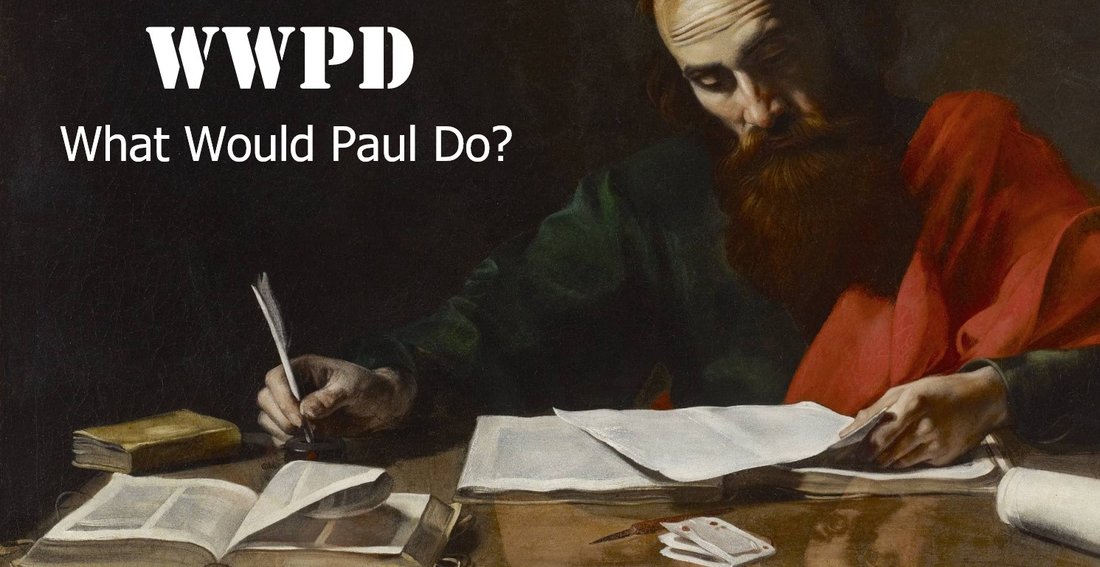 Oh, and I’m not relying on mere gender doctrine, either—which would actually tell me to put myself last. I have better justification for my grammar.

In 1 Corinthians 9:6, Paul wrote, “Is it only Barnabas and I who have no right to refrain from working for a living?”

Except that isn’t what he actually wrote.

In Greek: “ἐγὼ καὶ Βαρναβᾶς” (“I and Barnabas”)

In English: “Barnabas and I”

That’s how the ESV “corrects” Paul’s good Greek grammar to make it good English grammar. The KJV and about a dozen other English translations retain Paul’s order, but most read like the ESV.

Surprisingly, however, here is the NIV: “I and Barnabas.”

Wow! I see no semantic reason for retaining the Greek order of these words, and the NIV places a high priority on using normal English language conventions. Yet here they are more hyper word-for-word than the ESV. What gives?

At any rate, there you have it: Both Paul and the NIV give me permission to put myself first.

I and you will just have to get over it.

Do I really want to read your comments on this one? Share them below if you feel you must.

Today while studying Greek I encountered an exegetical puzzle. Who is lording over whom in this verse?

“25 But Jesus called them to him and said, “You know that the rulers of the Gentiles lord it over them, and their great ones exercise authority over them. 26 It shall not be so among you.” –Matthew 20:25-26 (ESV)

Here is a more specific question: To whom does the final “them” in verse 25 refer?

(Another detail as you ponder: the “their” at the beginning of the second clause translates οἱ, a plural article that could just as rightly be translated “the.”)

Until today, I have always assumed (1) is the correct answer. That is how the ESV and a host of other English translations read most naturally to my ears. In other words, the translations I scanned seem to generally present the two clauses of of verse 25 as parallel to each other:

By this understanding, both “them”s refer to “the Gentiles.” They are the ones being lorded over in both clauses.

Some translations suggest that either the nouns (rulers/great ones) or verbs (lord it over/exercise authority over) of one or the other phrases may be stronger, but the phrases are still usually presented as parallel.

But today I read another translation that suggests something I had never even considered before:

That is how Rodney J. Decker translates the verse in his Reading Koine Greek textbook. (Decker, now deceased, was no slouch with Greek.) The bracketed explanation is his, not mine.

According to this interpretation, not only are the Gentiles lorded over, but even their rulers are lorded over by those greater than them.

I don’t know whether Decker is right.

If Decker is correct, then Jesus was not only prohibiting individual persons from forcibly ruling over others in his kingdom, but he was also condemning a hierarchy of such rulers. And both have been a problem in the church, right?

To test Decker’s interpretation, I’d want to do several things I don’t have time now to do:

Either way, the essential message of Jesus is clear: If you are my disciples, don’t lord it over others! That’s not how my kingdom works!

What do you think? Which way have you read this verse? Do you find Decker’s interpretation convincing? Why or why not? Share your insights in the comments below.