Two days ago I was privileged to speak at the memorial service of my father-in-law, Albert Mast. This was a great honor, and a wonderful opportunity to ponder the life that is ours in Christ Jesus–resurrection already and resurrection not yet!

This post will be a bit of a tossed salad, so here’s an ingredient list to help you proceed:

Audio of Sermon and “So What?” Thoughts about Resurrection

Thanks to each of you who prayed for me regarding this sermon! I felt God’s strength and zeal as I spoke, and I sensed people were listening. Our primary texts were Romans 6:11 and 1 Peter 1:13, and my primary goal was to help people rejoice in the blessings of Christ’s resurrection and long for his return.

Here is the sermon: “The Lord Is Risen! Come Lord Jesus!” (right-click title to download audio or listen below)

After the sermon, a friend who had read my recent post about resurrection to come (What is the Christian’s True Hope in Death?) and who heard me share similar thoughts in the sermon asked me a question: Why does it matter? Why is it important for us to fix our hopes on Christ’s return and our resurrection then, rather than merely anticipating dying and going to heaven? My friend agreed with what I had shared, but wasn’t sure what difference it made.

Good question! I shared with my friend an illustration that I didn’t have time to share during the sermon. I’d like to share it here, too.

Imagine, if you can, that you agree with me that the “good guys” in the American Rebellion–er, the American Revolutionary War, that is–were the British, and not the American colonists. (I’m speaking here as my adolescent Canadian self, not my adult kingdom-of-God self.) Now imagine that you and I are both British soldiers, returned from the war. Imagine I come up to you after the war is over and say something like this:

How would you respond? I suspect you’d knock me about the head a time or two to bring me to my senses and shout, “But what about the kingdom? What about the king’s colonies? How can you say we won the war when the king lost his kingdom?”

(If that illustration is too difficult for your imagination, then use the American invasion of Iraq instead.)

Now imagine a similar conversation, this time between you and me as we discuss our Christian war against sin and Satan. Imagine if I say something like this:

“Isn’t it great how we’ll win this war! Saints in the past have engaged in quite the battles with Satan, and there have been wonderful victories. Think of Noah, and Abraham, Moses, and David–a long list of heroes of the faith that have stood firm against the forces of darkness. Sure, the nation of Israel eventually fell away from God and was sent into exile, but then God started a whole new campaign with his Church! Peter, John, Paul, then Augustine, Saint Francis, William Tyndale, Martin Luther, Felix Manz, Menno Simons, William Carey, Billy Graham, and countless more [edit the list as you wish]–what a list of victors! Each one of them, at his death, escaped safely to heaven. And now, just as the war is raging at its fiercest, and the Church is being reduced to a tiny remnant band, we have this wonderful confidence: God is going to call us home and we’ll all go sailing off safely into heaven! Isn’t it wonderful how we’re going to win the war!”

Now, what would be a proper response to such an outburst? I suggest the following: Hopefully you’d knock me about the head a bit (metaphorically, of course) and sober me up with these words: “But what about the kingdom? What about God’s original purposes for the wonderful world that he created? How can you say we will win the war if the King will loose his kingdom?”

When God created the world (Gen. 1-2), he created it perfect but incomplete. It possessed the perfection of an immature child. God put humans into his world to steward it and to bring about his creative purposes for his world. But Satan and sin hijacked God’s original intent. More accurately, God foreknew sin’s entrance, and planned all along to work through it. However we word it, this fact remains: God’s purposes for his world remained incomplete at the time when sin entered. If this is true, then salvation alone–the removal of sin from human hearts or even from the cosmos–is not the sum total of God’s purposes for his creation. No, after sin is removed God will want to get on with his other plans for his creation.

Ask a cook, “What do you want to do with these dishes?” and he might answer, “I want them washed.” Ask a 16-year-old what he plans to do with his car and he might say, “I plan to give it a wash and a wax.” But no cook would be satisfied washing dishes without ever getting to cook with them, and it is a rare teen who would be content working at a car wash all day and never driving a car! To reduce God’s purposes for his world to his “plan of salvation” is like reducing a cook’s purposes for dishes to his plan for washing them.

So what difference does it make if we focus on dying and going to heaven rather than on Christ’s return and our final resurrection? I think it is the difference between being satisfied with human salvation or rejoicing in God’s victory. Is it enough for me that I win? Or do I care about God winning? Do I imagine a grand conclusion where Satan succeeds, kamikaze-style, in demolishing God’s good creation? Where Satan, like Samson, dies while bringing down God’s house? Where God wins the war but looses half his kingdom? Or do I grasp God’s vision for creating “new heavens and a new earth in which righteousness dwells” (2 Pet. 3:13)? Do I remember that my own eternal glory is bound up in his, and that the Bible hints at things like us reigning with Christ (2 Tim. 2:12) and judging angels (1 Cor. 6:3)–things seemingly timed to happen only long after my death, when Christ returns?

More could be said, but hopefully that begins to answer the “so what” question that my friend raised. There is much I don’t understand yet about God’s purposes for his creation. God still has some big secrets up his sleeve. But this much I do understand: God’s purposes matter, and they will be fulfilled! Through Christ God will “reconcile to himself all things, whether on earth or in heaven” (Col. 1:20).

If you want to read more, the book that has shaped my thinking as much as any other (besides Scripture) is on sale on Kindle right now: Surprised by Hope, by N.T. Wright.

In my sermon I quoted an old gospel song by Sabine Bar­ing-Gould that I a friend shared with me just a few days ago. Here are two of its eight stanzas. Notice especially the lines I’ve emboldened. How often do you hear such ideas in a gospel song?  I think this author understood our Christian hope well.

For a while the wearied body
Lies with feet toward the morn;
Till the last and brightest Easter
Day be born.

But the soul in contemplation,
Utters earnest prayer and strong,
Bursting at the resurrection
Into song.

“Burial Ground” — An Article by My Mother

If our sights are to be fixed on our final resurrection and not merely on going to heaven, then how should we bury our loved ones? During the sermon I answered this question by quoting from an article written by my mother (Elaine Gingrich). Mom wrote this article over 20 years ago, after death touched my life significantly for the first time by claiming the lives of five young friends in a car accident.

Here is the article: Burial Ground  (By the way, I discovered just now that in my sermon I misquoted a Tozer quote that Mom uses in this article: It should be “It is hard to imagine anything less hopeful than the sight of a burial”–not “more hopeful.” But sorry, Tozer; I think I like my version at least as well.)

At Albert’s memorial service his “little” brother Glen Mast told a story that few of us knew. Five or six years ago, when Albert’s pain was at its worst, he experienced a severe trial of his faith. One time when Glen was visiting, Albert confessed that he felt “worthless.” Worse still, Albert was troubled by this question: What if someday he would stand before God and hear these terrible words: “I never knew you, depart from me.”

Glen reassured Albert, reminding him that, while each of us is unworthy, none of us are worthless. God paid a dear price for us! Glen also explained that when Jesus foretold those terrible words, “I never knew you,” he was warning religious leaders who felt no need for Jesus. Albert, on the other hand, had relied from his youth on the grace of God given through Christ (Eph. 2:8-10). God knew his name! (I might add that Jesus was describing false prophets who seemed more interested in wielding the power of God than in doing the will of God.)

Then Glen showed Albert and Katie (my mother-in-law) a video of a presentation by David Powlison, called “Christ’s Grace and Your Sufferings.” (Click the link for audio and video options. Or go to page 145 of this free PDF book for a transcript.) Powlison shapes his talk around the grand old hymn, “How Firm a Foundation“–a hymn which, unlike most hymns, has God speaking directly to us for most of its verses. (When re-enacting this story at Albert’s memorial, Glen had us turn and face each other while singing verse one, then turn our hands palms-up toward God while singing the rest of the song.)

Glen’s words, Powlison’s presentation, and the words of this hymn were used by God to renew Albert’s faith. Perhaps they will renew the faith of someone reading this blog, too. 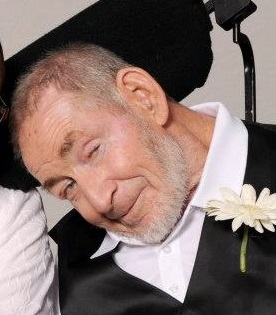 Albert Mast was born on May 2, 1943 in Thomas, Oklahoma,  the son of Joas and Katie Mast.  He was married to Katie Stoltzfus on November 10, 1973.  Later that year, they moved to Leon, Iowa, where they farmed and eventually established the family baking business, Mast Family Farm.

From a young age, Albert faced many challenges related to what was eventually diagnosed as dystonia.  Though some of those challenges shook him at times, he held fast to his faith in Christ, and lived a vibrant testimony of joy in the midst of pain.  He was known for his determination, his smile in spite of his pain, his care for others who were hurting, and for planting straight rows.  Some of Albert’s favorite quotes: “I may be crippled, but I am NOT handicapped.”  “If you can do it, so can I.”  One of his life verses was Philippians 4:13.

Donations in memory of Albert may be made to Dystonia-Foundation.org or Hospice of Central Iowa.