One body, united by baptism and bread.

Yet Christ’s one body today certainly does not share one understanding about either baptism or bread (the Lord’s Supper).

John Hammett’s new book might not solve this problem, but it does provide admirably balanced and irenic guidance for thirty-eight of the questions that divide us. 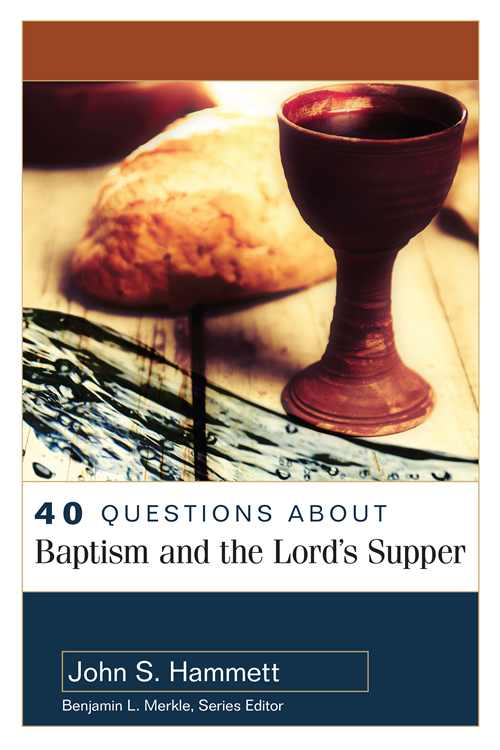 Hammett’s book is part of a series of “40 Questions” books published by Kregel. I’ve read one other in this series—40 Questions about Interpreting the Bible, by Robert L. Plummer—which is, in my estimation, a very good choice for a first book on its topic (see here). Hammett’s book is equally easy to like.

I’ll summarize the book by posting the questions that form the chapter titles. Then I’ll make a few observations both positive and negative.

Hammett’s book is well organized, with logically sequenced topics, discussion questions at the end of each chapter, a bibliography of related books, and a Scripture index. A curious reader could easily start with any question that interests them, find the relevant chapter, and jump in. There’s just enough repeated content to ease such reading (not too much) and occasional pointers to other relevant chapters for more detail.

Here is the outline from the Table of Contents:

Part 1: General Questions about Baptism and the Lord’s Supper

20. When Should a Child Be Baptized?
21. Should Baptismal Beliefs Be a Cause of Division?

Part 3: Questions about the Lord’s Supper

There is much to praise in this book, but I’ll start with a few things I that disappointed me:

Scripture nowhere gives us a list of how many sacraments to observe, or even explicit criteria by which to discern them. (p. 25)

But how does one come to a certain understanding of the nature of sacraments (as a category of rites, that is, not the nature of each individual rite) if Scripture provides no “explicit criteria by which to [even] discern them”? Apparently you lean on a definition from John Calvin:

Then you claim “clear biblical basis” for that definition:

The lack of a clear biblical basis (a divine promise sealed by a sign with clear divine ordination of it as an ongoing rite for the church) has prevented anointing of the sick from being seriously considered as a sacrament by Protestants. (p. 30, emphasis added)

Finally, you critique Catholics for lacking a “clear biblical authorization” for five of their sacraments, while claiming your own are “deeply rooted in biblical teaching”:

A… deeper reason for Protestant rejection of five of the seven Catholic sacraments is the lack of clear biblical authorization… Baptism and the Lord’s Supper were never question [by the church, regarding their status as sacraments]; they were obviously deeply rooted in biblical teaching. But the others were dubious at best. (p. 32)

Lacking any biblical list of sacraments or any meaningful biblical criteria by which to discern them, Hammett ultimately rests his case on Calvin, as the final two sentences of this chapter reveal:

Calvin repeatedly raised the question of a divine promise or a divine command authorizing a practice to be considered a sacrament. Lacking such divine ordination, they [Protestants] refused to recognize confirmation, penance and reconciliation, the anointing of the sick, holy orders, or matrimony as sacraments. (p. 32)

Should we approach the Lord’s Supper seeking to affirm, renew, and celebrate our unity with all Christians (the universal body of Christ) or with a church (a local body of believers)? I think it is significant that the term for church in the New Testament is overwhelmingly used for local churches, and that Paul’s criticism of how the Corinthians were observing the Lord’s Supper in 1 Corinthians 11 is due to the lack of unity in the local body. Moreover, if we want to affirm Christian unity, we have to accept that at present we simply do not have it yet in terms of the meaning of the Lord’s Supper, so why not affirm our unity around the gospel, which is the proper boundary of Christian unity? (p. 271)

There are additional problems with this paragraph. For example, Hammett’s claim that “the term for church in the New Testament is overwhelmingly used for local churches” needs to be moderated by several facts. First, “church” often refers to all the Christians in one city, and each city often possessed multiple house church congregations. (This was likely the case with the “local body” at Corinth.) Second, often the term is used in the plural (“churches”) in such a way that the unity of all congregations is strongly emphasized, rather than their individual autonomy (e.g.: “This is the rule I lay down in all the churches”; 1 Cor. 7:17).

Also, Hammett’s suggestion that the universal body of Christ unite around the gospel rather than sharing the Lord’s Supper together is curious given that elsewhere he emphasizes “the general agreement that the Lord’s Supper is meant to be a visual proclamation of the gospel” (p. 208).

This failure to appreciate the NT emphasis on the universal body of Christ appears several other times in Hammett’s book, such as when he offers a false dichotomy between viewing the Christian life as primarily “individual” (“personal relationship with God”) or “corporate” (“the local church”) (p. 44). Why is this a false dichotomy? Because unless we commune with the broader church, the local church, too, will become ingrown. Corporate—a body word—must include Christ’s full body.

Later Hammett rightly underscores “the importance of unity in the body, with concern and respect for all the members, for worthy participation in the Lord’s Supper.” What do you think? Would this truth point toward open communion that welcomes all Christians, or closed communion limited primarily to local church “members”? What does Hammett conclude from this?

This would seem to fit much better with close or closed communion, in which those partaking have covenanted together as one body in Christ, than with a practice that allowed visitors and strangers to partake, with no knowledge of who they were or if they were prepared to partake worthily. (p. 275)

Why would a concern for unity lead one to restrict other Christians from sharing in the Lord’s Supper? Perhaps it would if one believes that it is the local church “covenant,” rather than (or in addition to) our shared baptism by the Spirit into Christ (1 Cor. 12:13), that joins us as “one body in Christ.” Craig Blomberg’s comment on 1 Corinthians 10:16-17 seems more on target:

If the Lord’s table symbolizes and promotes fellowship and unity with the risen Christ, then it should be open to all believers but to believers only.1

Hammett effectively draws on the positive NT evidence about the meaning and purpose of the Lord’s Supper. But, like most authors I’ve read who wrestle with the question of who may commune, he does not sufficiently consider this negative evidence regarding the use and abuse of excommunication. Both strains of evidence are crucial for a balanced theology and practice. (I hope to write an essay sometime on what the NT says about who should or should not be excommunicated.)

There are other such weaknesses in this book, but none of them are so central that they detract from the book’s general success. Here are some things I really like about Hammett’s book:

I am in the Baptist camp, both by heritage and conviction, and want to acknowledge the possibility of bias in my evaluations. Still, I will try to listen to the case made by others, critique them fairly, advocate the views that seem soundest to me, but leave the final evaluation to the reader. (p. 115)

If you wonder where Anabaptists fit in, he counts them among the Baptists and actually briefly quotes the Schleitheim Confession and Balthasar Hubmaier.

Attempting to describe the benefits Baptists see in celebrating the Lord’s Supper is difficult for two reasons. The first is simply the diversity of Baptists. They rarely speak with one voice on anything. The second is that Baptist discussion of the Lord’s Supper has often focused on errors Baptists saw in other views they wanted to deny. (p. 201)

Or this, quoting Millard Erickson:

In the past, in their zeal to deny the physical or bodily presence of Christ in the elements, some Baptists were accused of teaching ‘the real absence of Christ,’ the idea that ‘the one place where Jesus most assuredly is not to be found is the Lord’s Supper.’ (p. 238)

I think that those advocating a move to acceptance of multiple views on the proper mode and subjects of baptism are contributing to an undue diminution of the importance of baptism. The arguments for immersion and believer’s baptism, presented in earlier chapters, still seem to me strong and persuasive. I think Baptists can learn and incorporate much from those who see baptism as a sign and recognize divine activity in baptism as well as human response, and we need to do much better in putting our theology of baptism consistently into practice. But I agree with those who see other views of baptism as open to some troubling tendencies, and remain an advocate of believers baptism most of all due to its importance in maintaining a principle I think very important, that of regenerate church membership. For if, as is widely accepted, baptism is the rite of initiation into church membership, baptizing any but believers cannot but undermine that important principle. (pp. 178-79)

Obviously I disagree with Hammett on a variety of points. But I still really like this book. It is an excellent resource to help us listen to each other across our theological divides, and should help careful readers find common ground in Christ. Timothy George, whose book on The Theology of the Reformers I found so helpful (and discussed in an earlier blog series), summarizes my thoughts well:

This book surveys and treats with fairness a variety of competing views on baptism and the Lord’s Supper. A good resource for all Christians. (back cover)

This book is achieves its author’s purposes very well.
I give it 4-1/2 out of 5 stars.

What are your thoughts? Which of Hammett’s questions sound most interesting to you? Do you agree more with me or with Hammett on the points where I’ve critiqued him? What ecclesiological tradition do you think conservative Anabaptists could learn most from? Do you have another favorite book on these topics? Share your insights in the comments below.

Disclosures: I received this book free from the publisher in exchange for a review. I was not required to write a positive review. The opinions I have expressed are my own. I am disclosing this in accordance with the Federal Trade Commission’s 16 CFR, Part 255 <http://www.access.gpo.gov/nara/cfr/waisidx_03/16cfr255_03.html> : “Guides Concerning the Use of Endorsements and Testimonials in Advertising.”