Over the past month or so, much of my daily Bible reading has been in 1 and 2 Chronicles. My companion for these books has been Eugene Merrill’s new commentary. I am now several chapters into the second volume of Chronicles and have read all of Merrill’s comments on the text so far. I am enjoying the experience.

This is my first time reading through a Chronicles commentary. I came to Merrill’s book hoping for at least two things: (1) A clearer grasp of the special theological thrust of these often-overlooked books. (2) Some help to reconcile the apparent contradictions between factual details in Chronicles and the books of Samuel and Kings. Merrill has satisfied me quite well on the first point, but less so on the second. 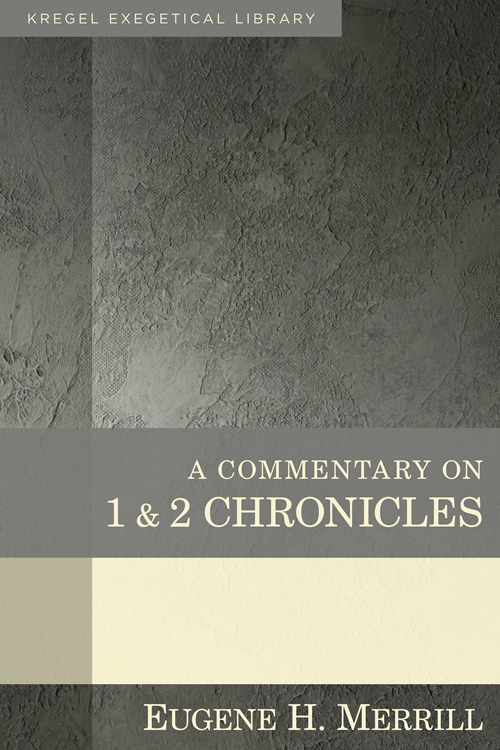 Merrill’s book is part of a new series of OT commentaries from the Kregel Exegetical Library. Like other volumes in this series, it targets a wide range of readers. Much of the commentary text is very readable and will be useful for most readers. The Scripture text is presented in the NIV (old, 1984 edition). On the other hand, sometimes Hebrew words are left untranslated, and detailed “text-critical notations” are presented after the NIV text—something I am unlikely to ever find useful.

This series appears to be aimed most directly at pastors, though it is a bit uneven in execution and format. For example, the volume on Judges and Ruth (by Robert B. Chisholm, Jr.) includes a long annotated outline of a 10-part sermon series for Judges, along with more “homiletical trajectories” described throughout the commentary. The 3-volume set on Psalms (by Allen P. Ross) includes extended guidance for writing an exegetical outline, an exegetical summary, an expository outline, and a single expository idea for a psalm, along with a “message and application” section at the end of each psalm. Merrill, in contrast, does not provide either sermon outlines or guidance on taking a text from exegesis to exposition, though he does include brief “application of the theology of…” sections throughout. Readers who like one volume may be disappointed to find another is structured differently.

Merrill’s introduction includes helpful discussions of all the expected topics, including the historical and cultural setting, authorship (“the Chronicler”), the author’s sources, the book’s placement in the OT canon, literary forms and genres, and theology.

The major objective of the Chronicler was to provide a theological interpretation of Israel’s past interlaced with great hope for an eschatological renewal of the Davidic house, one bound to Yahweh its God by an indissoluble covenant. It may not be too bold to suggest that the compilers of the canon shared this same conviction and thus placed the book where they did [at the end of the Hebrew OT]. (p. 46)

This quote mentions two of the main themes Merrill identifies in Chronicles (the house of David and the renewed covenant), to which he adds a third: the restored temple.

The body of Merrill’s commentary discusses the text section by section (usually not verse by verse). Sections range in length from several verses to an entire chapter, and they are grouped in nine commentary chapters, such as “The Genealogies” or “The Rise of David.” Also included are:

To show how this works, I’ll zero in on one of Chronicles’ most famous chapters–1 Chronicles 21. Merrill entitles this “David’s Census and Its Aftermath.” This is the final section in a chapter called “The Exploits of David” (1 Chron. 15:1-21:30). Here you will find:

In addition, since this is the end of a commentary chapter, you will find these:

Strengths: Merrill is an expert on OT history, so this commentary is surefooted on issues like historical dates and making relevant connections to other OT passages. He has also written on OT theology, so he does well at tracing the main theological themes of Chronicles, making connections to the rest of the OT and even to the NT. Judging by the footnotes, though Merrill is now an elderly man, he has remained up-to-date on recent secondary scholarship. His pastoral heart also shines through, producing occasional little gems like this: “Man at his best falls far short of God at his ‘worst'” (comment on David’s dilemma of choosing a punishment in 1 Chron. 21:13).

Most pastors or Bible teachers should find this commentary useful. I haven’t compared it carefully with others (see this list), but can imagine there are much worse choices (older, dryer, more critical, etc.). In particular, if you want to trace the main theological themes of Chronicles, Merrill will serve you very well.

Weaknesses: This commentary disappointed me primarily in two ways. First, for a technical work of this stature, there is an astounding number of editorial or proofreading errors. I counted about 28 in the introduction and the chapters covering 1 Chronicles, and spotted more scanning the second half. For example:

I have not found errors of this number in commentaries by other major publishers such as Eerdmanns, Zondervan, or Baker Academic. Perhaps Kregel is rushing their new commentary series to press, trying to catch up to the other publishers? (Note to Kregel Publications: If you want a list of all the errors I found, please contact me. In fact, I may also be open to a job as a copy editor!)

The second way in which Merrill’s commentary left me hungry was his handling of the apparent factual contradictions that Chronicles presents. He does a very good job of noting that there is nothing automatically deceitful about the Chronicler’s intent of presenting David in a positive light, as a messianic figure, thus overlooking most of the darker episodes in his life. Every historian is selective, and the Chronicler is simply presenting the aspects of David’s life that will be most beneficial for his post-exilic readers to consider, based on their own needs.

To omit historical information is not a matter of deceitfulness, evasiveness, or intellectual dishonesty. It shows bias, indeed, but that does not and should not be a criterion for either truthfulness or, in the case of Scripture, inerrancy. (p. 239)

All this I heartily affirm. But I am still hungry for better explanations of the apparent contradictions in Chronicles. (By “apparent” I do not mean “certain” but “visible.”) For example, consider this commentary on 1 Chronicles 3:1-24, which notes that the Chronicler does not always provide the same list of David’s sons:

The differences between Samuel and Chronicles [in this chapter] may be easily explained, perhaps, but the differences within Chronicles are not. The best suggestion is to suppose, as many scholars do, that the book is more a compilation of texts than one authored by a single author at one time. In any case, the overall message conveyed by the genealogies, despite their similarities and differences, is little affected. (p.107)

Maybe it is okay that the Chronicler does not always present the same list of David’s sons? But what about when Samuel says Joab counted 800,000 men from Israel and 500,000 from Judah (2 Sam. 24:4-9), while the Chronicler says he reported 1,100,000 men from Israel and 470,000 men from Judah (1 Chron. 21:4-7)? Is it enough to say that the difference “can be explained by Chronicles’ use of a tradition different from Samuel’s” (p. 246)? This solution, of course, suggests that Samuel and Chronicles never matched. (There are other proposed resolutions for this passage, though I have not seen any that seems obviously right to my finite mind. I invite solutions.)

Neither text finds help through other versions and manuscripts so the answer must lie in an ancient misreading, no doubt in or by the source used by the Chronicler. (p. 250)

Perhaps Merrill is right; perhaps the books of Samuel and Chronicles never matched each other on all such factual details, not even in their original manuscripts. And perhaps the mismatch involves prior “misreading” which would not be explainable as anything other than factual errors even if we possessed all the data. Perhaps not all apparent contradictions can be rightly chalked up to copyists’ errors in subsequent centuries. If so, however, our theology of the trustworthiness of Scripture (something Jesus clearly affirms) must account for such realities.

Perhaps Rodney Yoder’s comments about Bible texts and translations (in The Story Behind the Versions) can point us in the right direction:

Sometimes the people copying or translating the Word of God simply made mistakes.

So, if people made mistakes in preparing the Bible version I am reading, am I still actually reading the very inspired Word of God? Yes, because God chose to give us that infallible Word in a way that it is not lost amid a few human blunders… The kind of faults or errors that creep into a text through normal human copying and translating will never destroy God’s message.

If acknowledging that our copy of the Scriptures is not perfect makes us uneasy, maybe our faith is resting on a faulty foundation. Our faith must not rest on whether or not we have access to a flawless copy of God’s Word. Rather, our faith must rest on God Himself. We know God has revealed Himself to mankind… We do not need to worry that God will fail to reward those who diligently seek Him, or that He will fail to lead us into all truth. (pp. 7-8)

For whatever reason, God has not given us… a completely flawless copy of the Book that He inspired. But He has assured us that His Word [the message the Bible proclaims] is forever settled in Heaven… It seems that He intended the Bible to be a treasure in an earthen vessel, so that all could see the power is from Him and not of us. (p. 70)

So I applaud Merrill for his honesty in noting apparent contradictions, but I long for a better explanation of how the text of Chronicles can be integrated into a coherent theology of the trustworthiness of Scripture.

Merrill has written a solid commentary on Chronicles. It is packed full of historical and theological insights. It has helpfully spurred my thinking on topics such as the OT priesthood and holy war. I look forward to reading the rest of Merrill’s work as I complete my devotional reading of Chronicles!

This book shows good scholarship but poor editing.
I give it 4 out of 5 stars.

Do you have a favorite Chronicles commentary? Do you have insights on how to integrate the apparent contradictions of Chronicles into a theology of the trustworthiness of Scripture? (Do you agree with Rodney Troyer’s perspective on the text of Scripture?) Share your thoughts in the comments below.

Disclosures: I received this book free from the publisher in exchange for a review. I was not required to write a positive review. The opinions I have expressed are my own. I am disclosing this in accordance with the Federal Trade Commission’s 16 CFR, Part 255 <http://www.access.gpo.gov/nara/cfr/waisidx_03/16cfr255_03.html> : “Guides Concerning the Use of Endorsements and Testimonials in Advertising.”