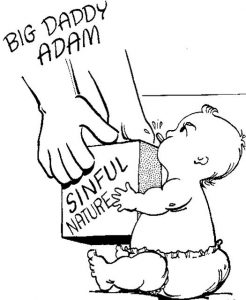 Perhaps the closest Paul comes to directly mentioning a sinful nature is when he says that we were “by nature children of wrath, like the rest of mankind” (Eph. 2:3). But in the same context he describes our sinfulness as a combination of outward realities and of the flesh–no mention of a sinful nature. He says we are “dead” [amazon template=thumbnail11&asin=0310243734](“alienation from the one who gives life,” a relational problem), “under the control of the age of this world” and “under the control of the ruler of the realm of the air”1 So our outward sin problem is that we are separated from God and under the control of the world and the devil. The inner aspect of sin Paul locates in our flesh, not in some sinful nature: “We all once lived in the passions of our flesh, carrying out the desires of the body [literally, flesh] and of the mind.” We were “children of wrath” when the world, our flesh, and the devil met apart from Christ’s saving presence. In this context, sin ruled us, leaving us “dead” under God’s wrath. Notice also that this passage speaks only in the past tense: Paul does not say that Christians are still “by nature children of wrath,” let alone that they still have a sinful nature.

[amazon template=thumbnail11&asin=0805401024]Another factor that got me thinking along these lines was reading a brief essay summarizing what the Bible says about the Book of Life. Perhaps all initially are written in Book of Life and only removed later by God when they have filled up the measure of their sins. From that essay:

“Everyone starts out in the Book of Life. It is a book of the living, and all who are born originally appear in it…. All who come into the world have the potential for eternal life… but most ignore, reject, disdain, put off, or otherwise forfeit that potential—and so their names are eventually blotted out of the Book of Life…. Their rejection of [God] eventually earns them rejection from being listed among the living.” Note: “One could argue that the time of blotting out would be when they died, once they no longer had any opportunity to retain their names in the Book by trusting Christ for their eternal life, but the Bible does not speak to the question of when blotting out occurs” (Douglas Stuart, “Excursus: The Book of Life,” [amazon text=Exodus&asin=0805401024], pg. 688).

[amazon template=thumbnail11&asin=0836113144]The 1963 Mennonite Confession of Faith tries to get around the problem of guilty-because-we-have-a-sinful-nature by saying:

One thought on “What’s this bit about “sinful nature”?”